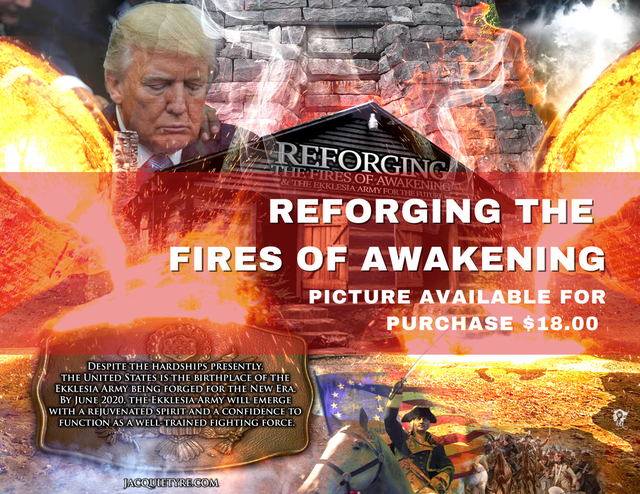 Reforging the Fires of Awakening Print

SKU:
$18.00
$10.00
$10.00
On Sale
Unavailable
per item
The piece of graphic art was created by David Munoz to illustrate the prayer journey that was conducted in response to a prophetic dream through Clay Nash of reforging the fires of awakening to launch the Ekklesia Army in this New Era.
Add to Cart
BACKGROUND DETAILS OF THE ART:

Original Dream by Clay Nash (ClayNash.org):
I dreamed that Dutch Sheets summoned a team of people to meet him in Model, Tennessee. I was among them.

When we arrived, we found ourselves at a huge stone furnace for melting iron. It was fired up and full of molten iron. Dutch instructed us to help him in forming and engraving iron plaques. The plaques were poured and while still hot, we engraved them with these words:

Despite the hardships presently, the United States is the birthplace of the Ekklesia Army being forged for the New Era. By June 2020, the Ekklesia Army will emerge with a rejuvenated spirit and a confidence to function as a well-trained fighting force.

Dutch embossed each plague on the back with President Trump’s signature. Dutch told us that the President had given him Power of Attorney to sign his name.

Dutch then instructed us to transport these plaques while still hot, to the Red River Meeting House (in Kentucky) to be submerged in the water there to cool and molt before they were distributed to the nation.
Dutch then instructed that the distribution was to begin at Valley Forge, Pennsylvania, and move out to the Nation from there.
------------
Prayer Journey Assignment by Jacquie Tyre: Prophetically walk out Apostle Clay’s dream to activate the Ekklesia Army.

Model Tennessee Furnace: Decree that the REFINING FIRES will bring the people of God into a place of PURITY and ignite within them the FIRES of the PASSION OF THE FATHER, not their own passion which is unstable and fleshly. .
Red River: Decree the refreshing waters of the River to secure the PURITY and PASSION within the People of God, and to release the POWER of MY FIRE and MY RUSHING RIVER of Life to move through My EKKLESIA to bring healing and restoration of My Original Intent for this nation and the nations of the world.

Valley Forge: “As it was in the days of George Washington at Valley Forge when the ill-equipped Continental Army walked through great difficulties at Valley Forge and emerged as an army well-equipped to win the Revolutionary War, so it is in these days that My Ekklesia has pressed through days of great difficulties being refined, equipped, and forged, strengthened and prepared with Purity, Passion and Power to rise up as My Ekklesia Army of Kings to do mighty exploits by My Spirit, and to advance in Victory against the seemingly insurmountable dangers of the battles ahead.”
Through a dream the Lord showed this journey being illustrated, containing each location and the decree of the plaque, and then being released to activate the Ekklesia Army for this New Era.